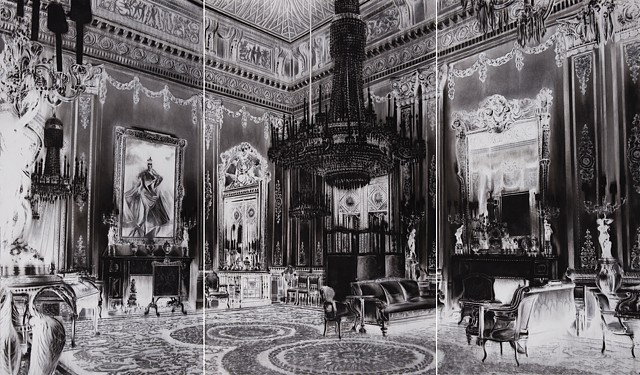 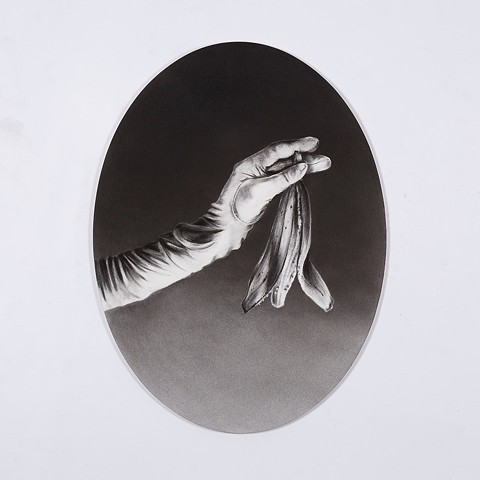 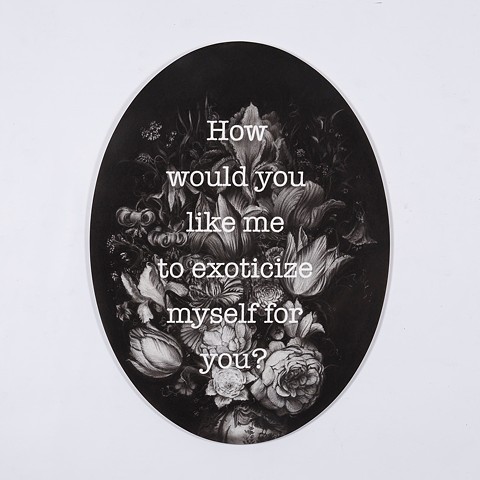 How Would You Like Me to Exoticize Myself For You?
Arches Hot Pressed Watercolor Paper Mounted on Oval Board
24 x 18 inches 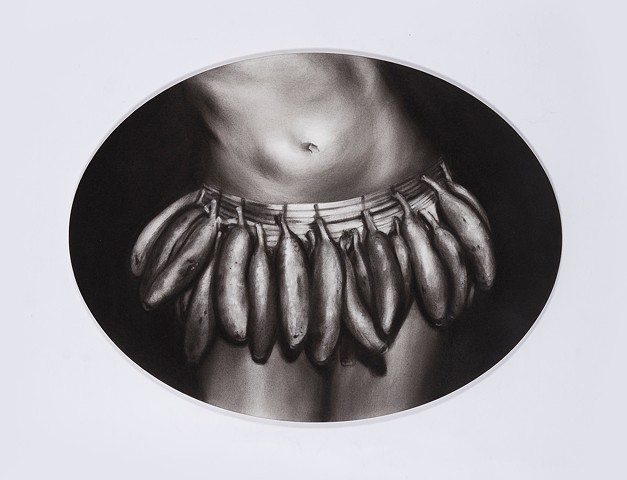 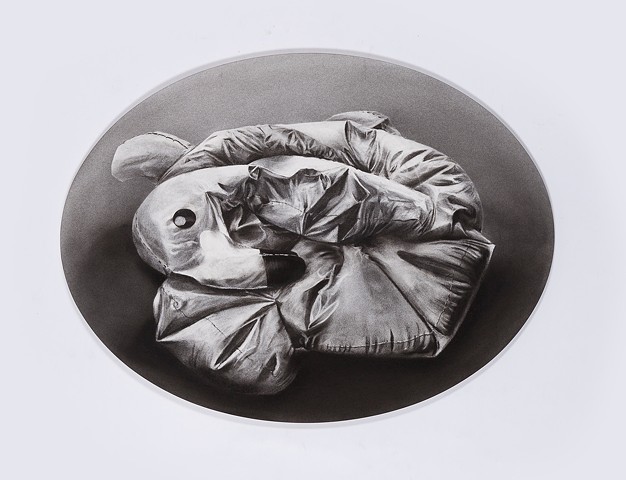 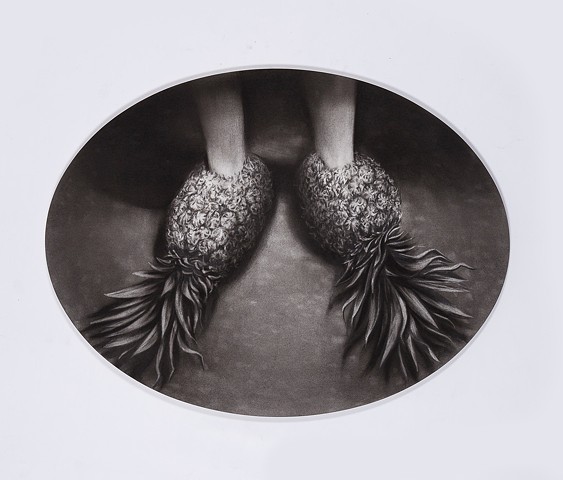 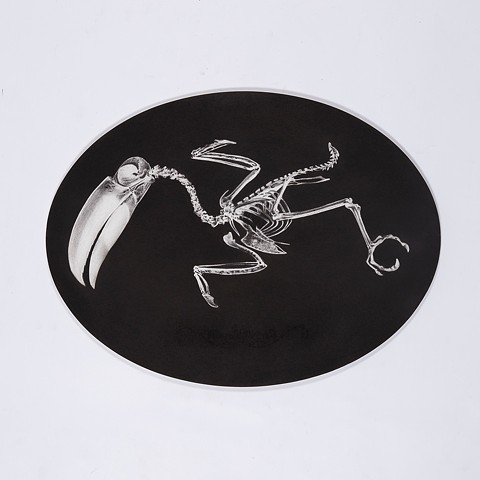 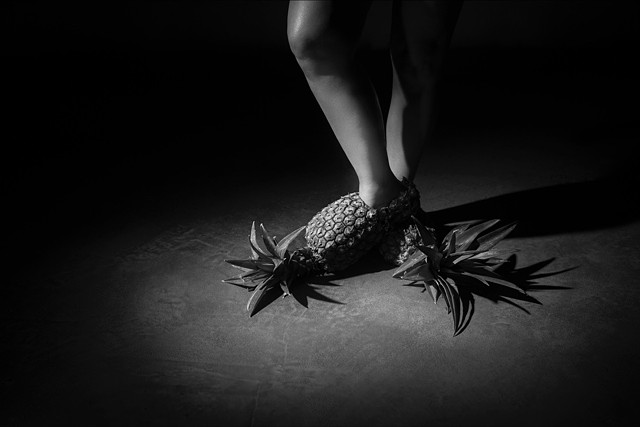 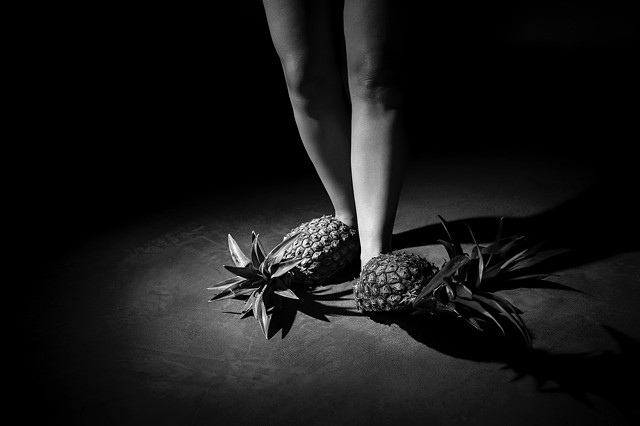 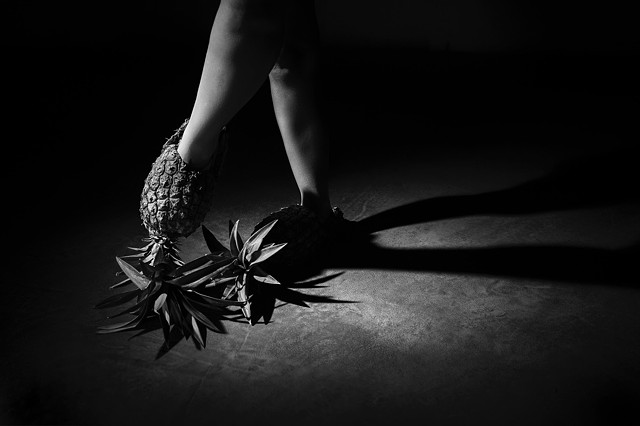 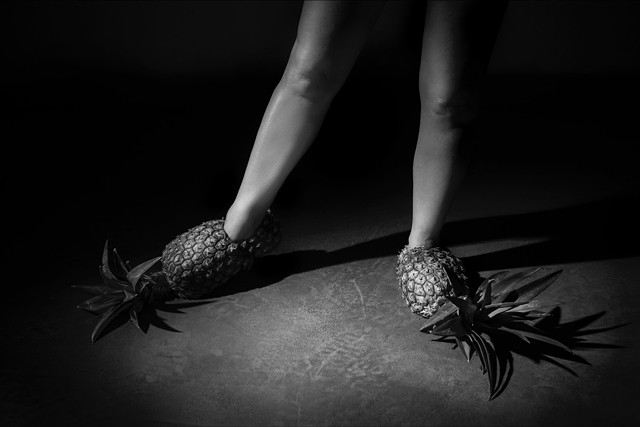 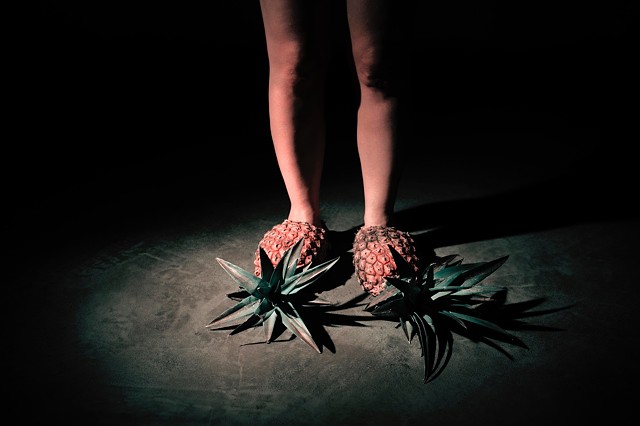 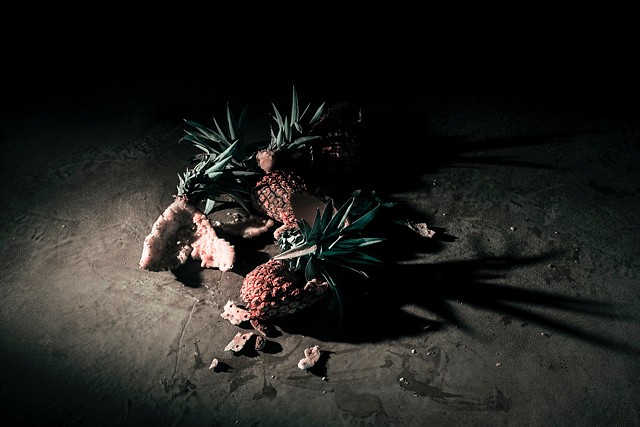 In “Tropicalypse” - a playful -yet macabre- word combination of “Tropical” and “Apocalypse”- Fuenmayor presents a challenging new body of work. His recurrent opulent and decadent charcoal drawings have grown dramatically in scale and complexity with two monumental multi-panel, charcoal drawings such as “Tropicalypse” and “The Seeds of Decadence”. These massive works portray two seemingly disparate scenarios: While the drawing “Tropicalypse” portrays an imaginary apocalyptic landscape of burning palm trees; a gesture alluding to the palm tree as an archetype of “tropical culture” in America, “The Seeds of Decadence” depicts a lavish and opulent Victorian room with inverted values.

Several oval shaped charcoal drawings complement these two massive works. Among these, “The Taste of Omnipotence” which portrays a Toucan fossil petrified in a charcoal background, foreshadowing the demise of the bird as an exotic signifier. Also, “Semantic Innocence”, a direct reference to Josephine Baker, which depicts the cropped body of the actress wearing a skirt made with bananas. Fuenmayor is interested in translating pop culture imagery together with his own, and is constantly displacing their meaning through the act of drawing. He is constantly questioning his role as a performer and spectator in the never ending dynamics of belonging. One last example is the drawing “How would you like me to exoticize myself for you? Where the discourteous question rests in the surface of the drawing, juxtaposed with a decorative Dutch still life scene in the background.

Accompanying the drawings, Frenesí, a video installation will be also shown. The three-minute long video depicts a ballroom dancer - cropped to the knees attempting to gracefully dance to Charleston and tap dance rhythms using pineapples as shoes. The result is an eerie and nostalgic commentary to transculturation dynamics.

Fascinated by the idea of how the exotic is created or established as a “trade mark” and of how, during this process, it ends up by being standardized, Fuenmayor presents, through these pieces, spaces for reflection, wherein the viewer is the conscious link that connects these monumental drawings. Eclipsed by an apocalyptic paradise, the viewer becomes the center towards which the juxtaposition of messages, image and landscape converge, as opposed to tedious order, opulence, and elegance.

A political, permanent, cyclic tropic – the central theme in these series is the image of a woman becoming exotic through her wearing a skirt made out of bananas (facing a European/white audience): it’s Josephine Baker – Exotic Tropics.

Assertively and endowed with an infinite tropical imagination, Gonzalo Fuenmayor creates post-earthly spaces, entropic tropics that burst in and permeate these enormous, dreamlike, subliminal images that allude to the fragility of the balance that rules over all things, perpetuating in this manner a new icon of the exotic/tropical concept in our subconscious.

Gonzalo Fuenmayor was born in Barranquilla, Colombia in 1977. He received an MFA from School of the Museum of Fine Arts in Boston, MA in 2004, and a BFA in Fine Arts and Art Education from School of Visual Arts in 2000, where he was awarded a full tuition scholarship from the Keith Haring Foundation. He has been awarded numerous awards including a 2015 South Florida Cultural Consortium Fellowship for Visual and Media Artists, Traveling Fellowship by the School of the Museum of Fine Arts, Boston in 2014, first prize at the 6th Bidimensional Salon at Gilberto Alzate Avendaño Foundation in Bogotá, Colombia, 2013, and a Silas Rhodes Family Award in 2000. Fuenmayor has exhibited in numerous solo and group shows in USA, Latin America and Europe; his work was recently showcased in a solo exhibition “Tropical Mythologies” at the Museum of Fine Arts, Boston in 2015, at the “Caribbean Crossroads” Exhibition at the Queens Museum, NY, “Florida Contemporary 2011" at the Naples Museum, as well as recent solo shows at Dolby Chadwick Gallery in San Francisco, CA and Gallery El Museo in Bogotá, Colombia in 2016. He currently lives and works in Miami, FL and is represented by Dot Fiftyone Gallery, Miami and Dolby Chadwick Gallery, San Francisco. This will be his third show at Dot Fiftyone Gallery.

An opening reception for the artist Gonzalo Fuenmayor will be held on Thursday, November 30th, from 7:00 – 10:00 pm. Dot Fiftyone Gallery is located at 7275 NE 4th Ave, Little River, Miami. The hours are Monday to Friday, 11 a.m. to 7 p.m. Saturday by appointment. For further information and visuals of the show, contact the gallery at 305-773-6537 or by email at isaac@dotfiftyone.com