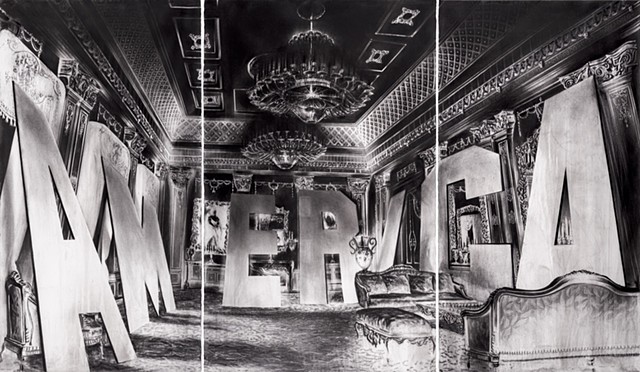 The Politics of Forgetting
charcoa, ink on paper
84 x 145 inches 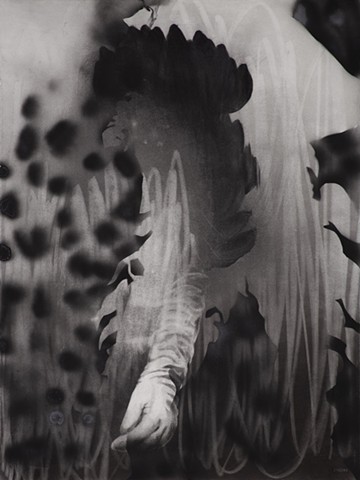 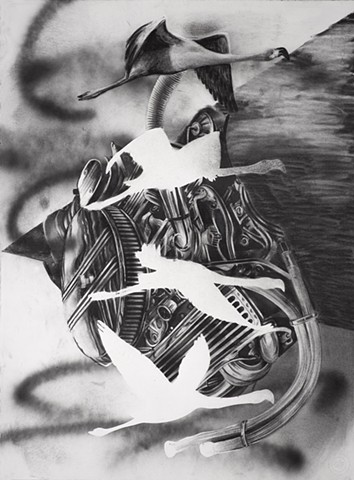 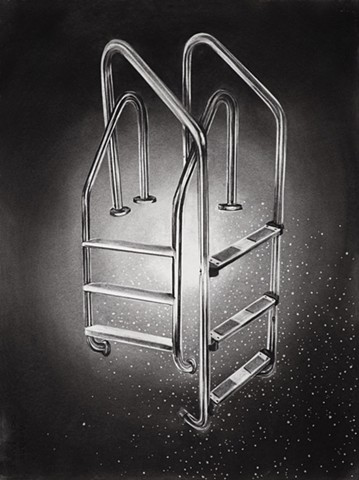 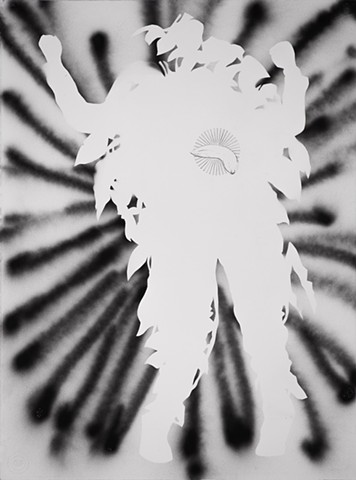 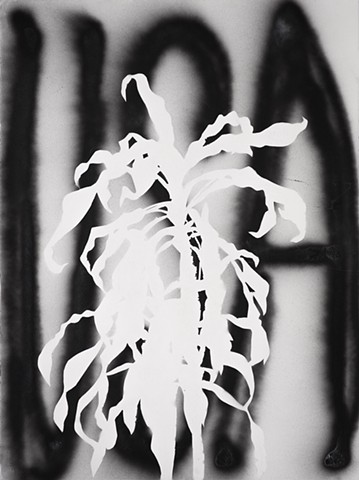 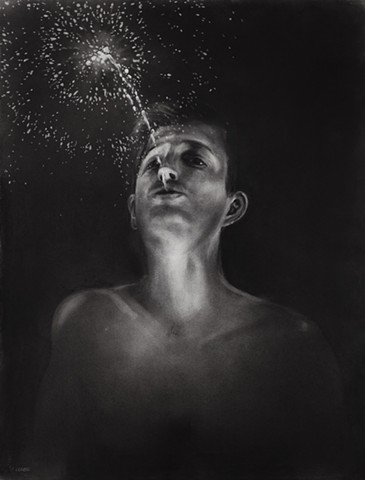 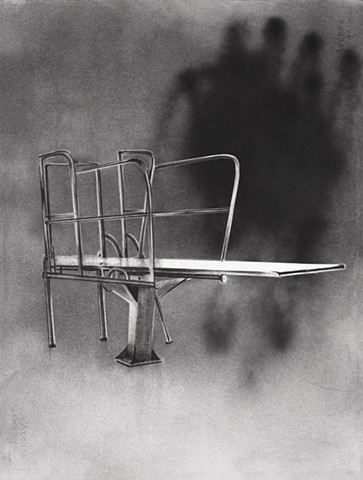 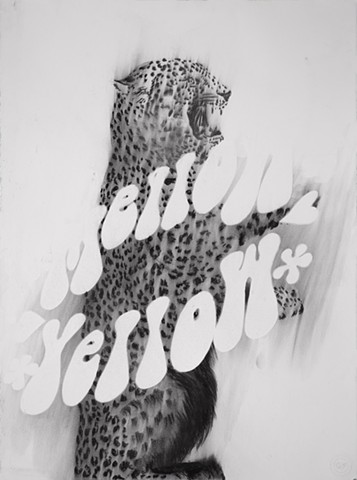 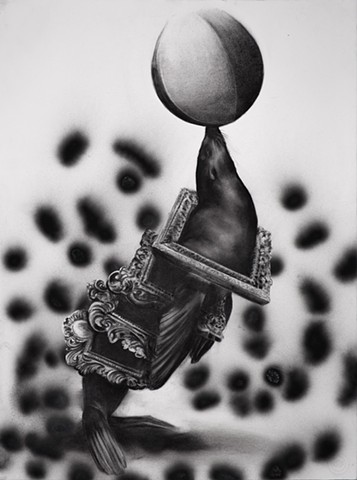 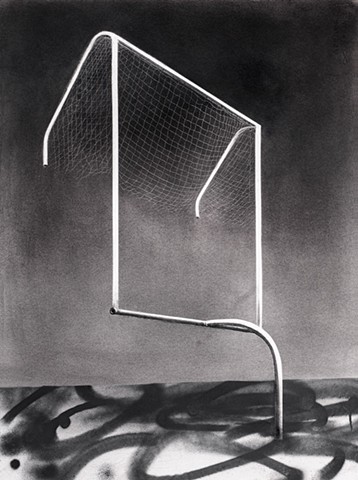 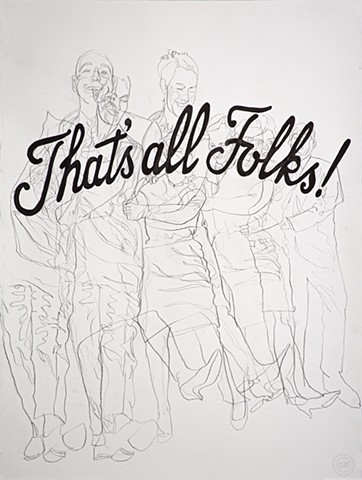 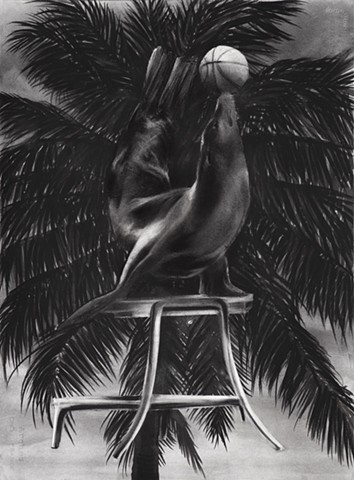 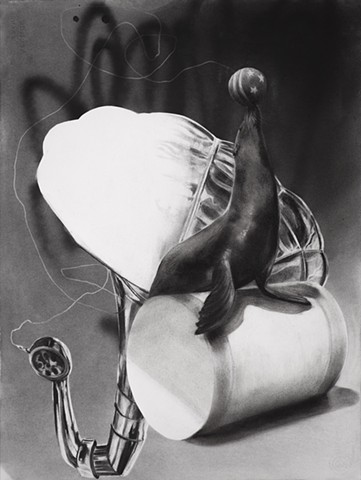 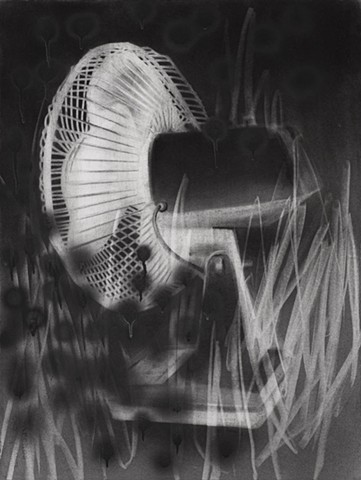 The Subtleties that Arise from Repetition
charcoal, ink, spray-paint on paper
30 x 22.5 inches 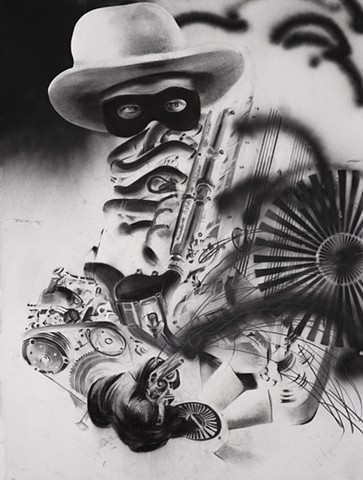 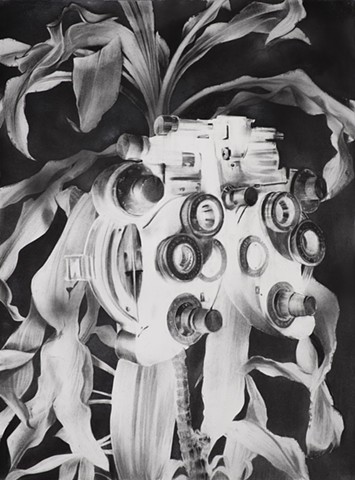 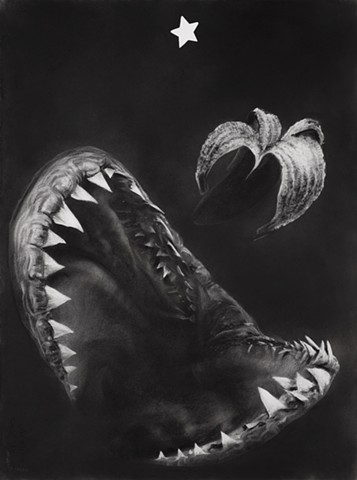 Gonzalo Fuenmayor’s current exhibition Palindromes at Dotfiftyone Gallery presents a series of works on paper produced by the Colombian-born, Miami-based artist during 2020. They represent his latest investigations into how images can speak to the dynamics of performing identity, negotiating cultural expectations, address histories of colonial exploitation and unpack tropical self-exotification. These reoccurring interests are particularly addressed in his practice to a pan-Latin American and U.S. Latinx context. Often incorporating text, literature and filmic references, the artist’s choice of title for the current exhibition nods to these creative resources. “Palindromes” are words that can be read both backwards and forwards and are referenced here in order to suggest that certain images might be understood as functioning in similarly multi-directional ways, contingent on who is interacting with them; how one’s own subjectivity, cultural background and history inform our reading.

Palindromes is also the title of a series of works that reveal new and intriguing formal explorations being pursued by the artist currently. Spray paint is engaged by Fuenmayor for the first time, creating a diversity of black and white gestural marks that add new depth and complexity to these compositions. While all of the artist’s images and textures are produced directly on the paper, he thinks of these works as functioning more like collages than drawings, a distinction that is further supported by his disjunctive use of imagery. His odd figurative juxtapositions also give the works with their surreal and uncanny character. The artist’s play with negative and positive forms is additionally remarkable, imbuing several works with a “rayogram” (developed by the Man Ray) photographic quality. This play with luminosity and opacities is in turn complicated through additional layering of drips, erasures and washes, that add to each work’s rich lighting effects.

Exotic trust is a beautiful example the new complexity, luminosity and visual depth that the artist is achieving with this series. A white gloved hand and arm extends toward the foreground, the crumpled fabric receding and dissolving into a group of erased white markings and the black silhouette of a large bunch of bananas. These figurative elements are taken from a previous work by the artist, which has been repurposed to nearly abstract effect. Stenciled foliage appears, in white negative at the right side of the piece and in black positive on the left. Spray paint is used to create irregular spots in this left section as well, while also generating cloudy gradients in other areas. Streaking effects in both white and black appear throughout. The overall result is an enigmatic image that pushes the limits between abstraction and representation in unusual ways.

Foreground and background appear slightly more stable in Painful precision of exile, which presents its subject in a hyper-realistic style. A seal is depicted, whose body holds in place several ornate frames and who balances a ball on its nose. This image is placed against a white background that has been dotted with black spray paint. The symbolic weight of Fuenmayor’s use of objects and in this case, animals, is highly present in this work. The choice of a circus seal, understood as a trained entertainer, speaks to notions of how identity is performed within particular contexts. The animal is shown as having moved through a series of frames, which are now held by his rotund form, perhaps referencing the multiple cultural “framings” or clichés that immigrants or exiled individuals must pass through, constraints they perhaps have superseded, or ones which they might have to continually bear and negotiate.

A performing seal is also one of the peculiar “characters” that appears in the gigantic work The Eucharist of Amnesia which serves as a visual anchor for the current exhibition. The dramatic scale of the piece specifically references the red painting Vir Heroicus Sublimis (1950-51) by Barnett Newman in the collection of the Museum of Modern Art in New York City. The composition of this iconic work of late Modernism is additionally referenced in Fuenmayor’s use of several colored vertical strips, that evoke Newman’s famous “zips.” For the younger artist this abstract painting had a strong effect on his artistic development, particularly regarding his understanding of the power of scale and how it can activate the viewer’s perceiving body. In his piece these formal and abstract elements frame a particularly strange scene. The seal is placed within a palace interior, surrounded by several men dressed in formal attire, apparently involved in some kind of governmental or royal ceremony. A pile of bananas is depicted in one area of the room and a gigantic installation of sound speakers covers an entire wall. A series of dots of white spray paint float across several areas of the composition.

Elaborate palace interiors and the gigantic chandeliers that illuminate them, have appeared in many works of the artist’s previous works. He has engaged these elements to address histories of imperial wealth, the colonial riches achieved through the subjugation of native populations and to address the contemporary ramifications of these violent pasts. With The Eucharist of Amnesia the specific interior depicted is that of Throne Room of the Royal Palace of Brussels, whose luxury was a direct result of wealth generated by Belgium’s colonial empire, particularly from what is now the Democratic Republic of the Congo. The bananas included in the drawing hint at the tropical contexts that have helped generate this opulent environment, while the sound speakers reference contemporary urban street cultures, particularly those of marginalized black and brown communities. The scene created is particularly incongruous, while feeling distinctly filmic, recalling irrational scenes from Surrealist-inspired films of the 1960s and 70s. Fuenmayor’s particular use of color in the piece, while extremely subtle and restrained, is new and rare within his practice, which for years has focused solely on the range of blacks, greys and whites possible with his charcoal medium. The strips of orange and turquoise jump visually forward, while the dots of cool, blue-white spray paint, through contrast, make the other whites in the piece appear warmer, more yellow or cream in tone.

A second large-scale piece is included in Palindromes, titled The politics of forgetting, (America). It draws on previous works by the artist that have engaged logos from famous Hollywood film studios. Here the specific font used for the large wooden “HOLLYWOOD” sign in Los Angeles is shown articulating the word “AMERICA.” It appears as a disassembled large-scale text installation, which is somehow being stored within an ornate palace interior. The details of the space, its columns, chandeliers, carpets and furniture are all depicted as if in photographic negative, a technique the artist has previously employed, which produces an overall burned effect, as if the entire room has been scorched. Film-related fonts has been used previously by the artist to address the U.S. film industry’s involvement in the “good neighbor” policy of the 1940s and 50s in Latin America, to reference how Hollywood films were used as propaganda, spreading ideology related to free market capitalism. Democratic rule and ideals of equal representation, individual drive and entrepreneurial values were also projected through American films, as was “American exceptionalism,” the view that its history and status is uniquely different from other nations. In Fuenmayor’s piece these messages symbolically now appear trapped within a decadent wealth, represented by this darkened palace environment. The piece becomes a reflection on the current political environment within the United States and the ambiguous, isolated or sequestered status of the nation’s ideologies within an international sphere.