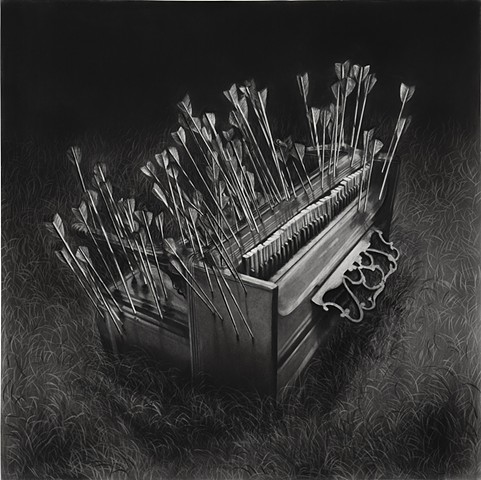 The Monopoly of Patriotism
charcoal on paper
60 x 60 inches 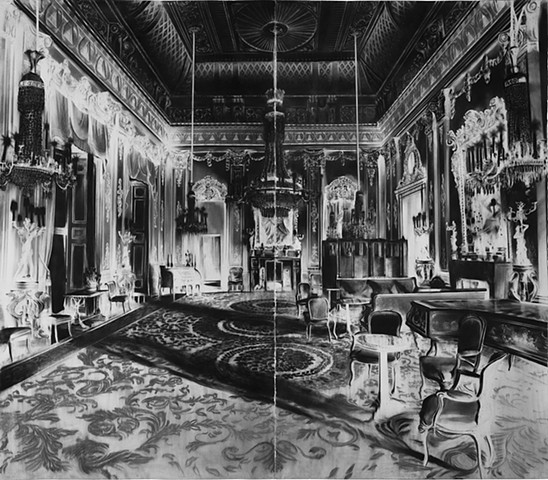 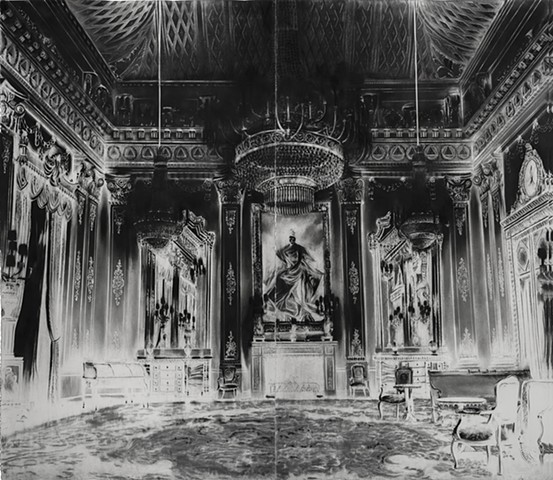 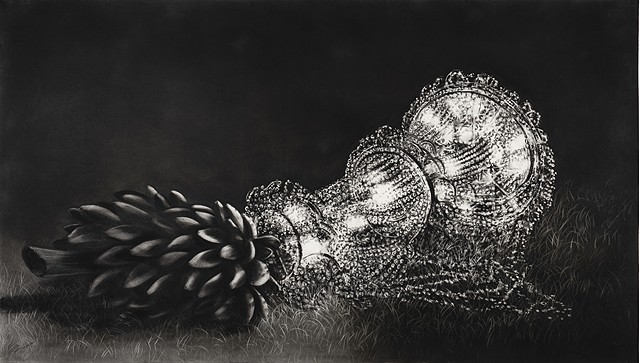 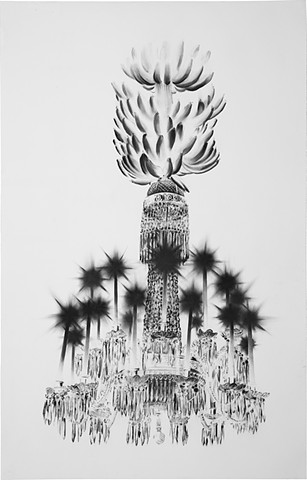 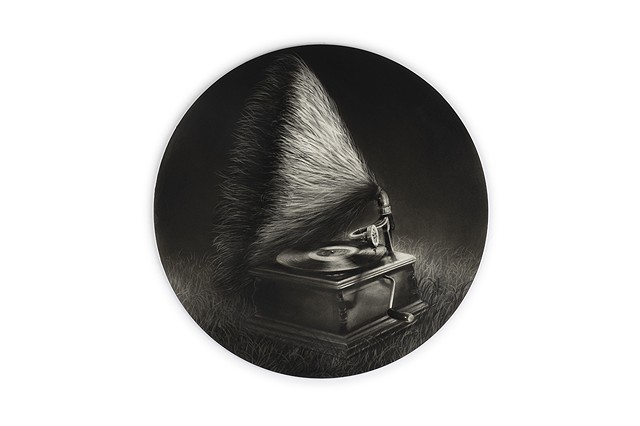 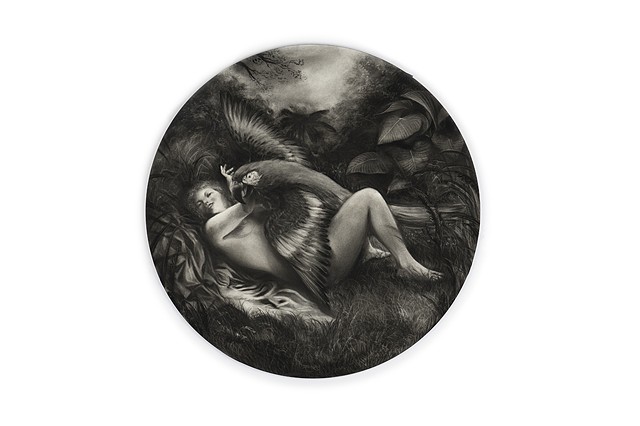 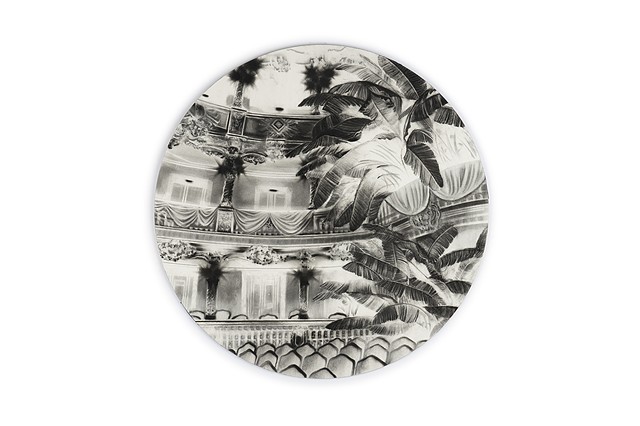 The Beauty of Inflections
charcoal on paper
36 inch diameter 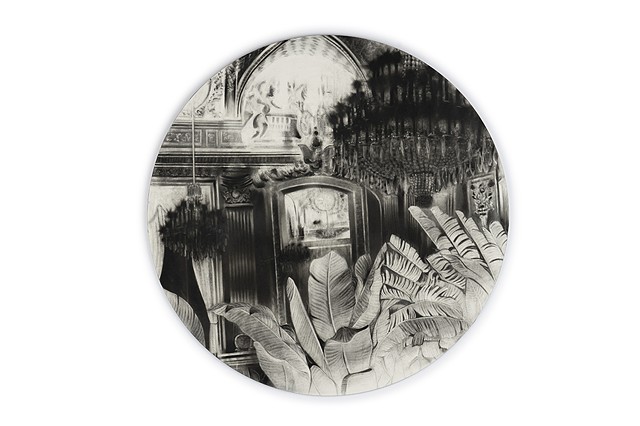 The Civilizing Power of Obedience
charcoal on paper
36 inch diameter 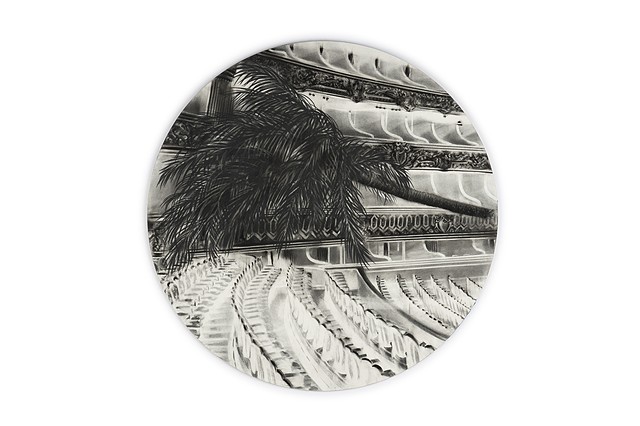 A Touch of Euforia
charcoal on paper
36 inch diameter 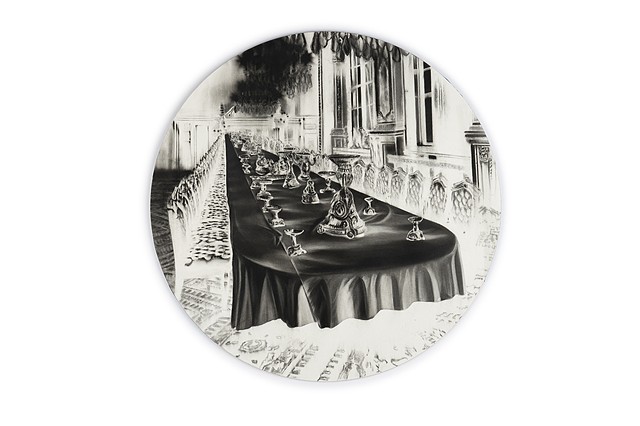 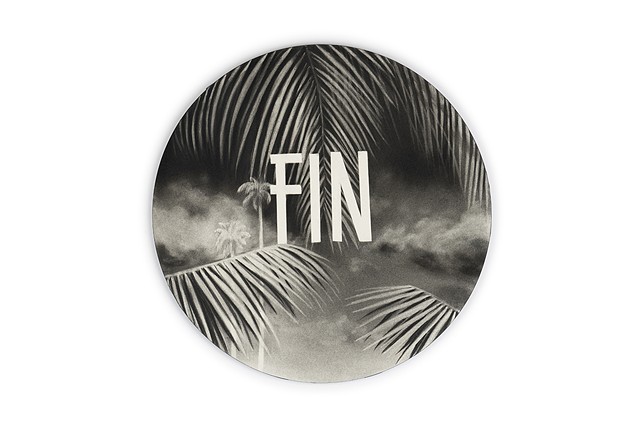 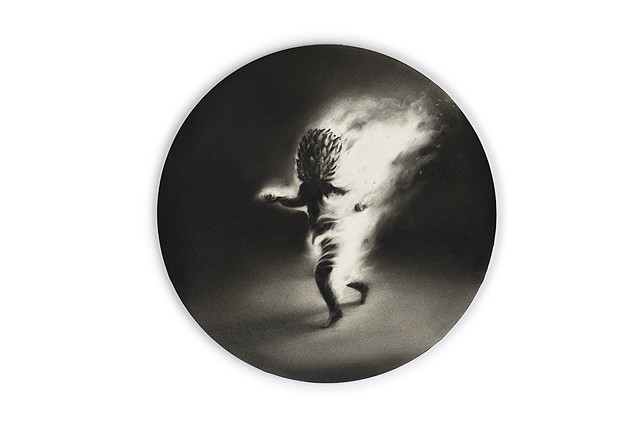 The Beasts of Conscience
charcoal on panel
18 inch diameter

Dolby Chadwick Gallery is pleased to announce Empire, an exhibition of new works by Gonzalo Fuenmayor, on view from May 2 to June 1, 2019. Born in Colombia but resident in the United States for most of his adult life, Fuenmayor has cultivated a practice that explores processes of cultural assimilation, colonialization, and exoticization. Empire draws on these past through-lines while also advancing beyond to think through new tensions and, in the process, reconsidering the visual language of his charcoal-on-paper medium.

This exhibition examines how we survive past empires, both political and personal. Though these empires today lie in ruins, their rules and structures often remain present, dictating norms and behaviors regardless of whether they are compatible with our professed contemporary values or ideal ways of being. Fuenmayor invites symbols of these past realms into his works and juxtaposes them with elements that oppose or resist. His goal is to set up complex matrices that instigate a thoughtful negotiation on the part of the viewer. How does the coming together of these disparate elements force one to look at the past’s impact on the present in new ways? How does it shift our expectations about our cultural and political realities as well as our individual emotional and psychological terrains?

Several of the works in this exhibition are monumental in scale—new territory for Fuenmayor. He explains that his decision to “go big” was influenced by his understanding of how the outsize works of Barnett Newman and Robert Longo impress upon the bodies and spatial experiences of the viewer. As a result of working in such a large scale, however, the way Fuenmayor applies the charcoal has had to necessarily change. From afar, the drawings seem almost Pop or even Op in their photorealistic pretense; however, when viewed up close, the marks are painterly and brushlike, a departure from the tightly rendered compositions of earlier.

In a work such as Imperial Dementia (2019), which is a massive 90 by 104 inches, scale serves a very particular, powerful purpose: it immerses the viewer, producing a sense of both embodiment and occupancy within the depicted space. The room itself is Buckingham Palace’s White Drawing Room, used by monarchs past and present to entertain guests. With its elaborate decoration—including ornate gilding and plush fabrics and furniture evocative of eighteenth- and nineteenth-century English aesthetics—the room is a dazzling symbol of wealth and authority. And yet, something is off. The light values have been inverted so that we seem to be looking at something akin to a photographic negative: shadow is often conveyed via white space while what should be the highlighted surfaces of solid forms are rendered in blacks. Perhaps most striking, the glowing bulbs of the chandeliers are replaced by eerie inky orbs, a subject that Fuenmayor revisits in works such as Moral Darkness (2018). A mysterious, phantasmagoric effect is created through these cunning inversions of light into darkness and darkness into light, asking us to reconsider established moral hierarchies and claims of enlightenment and progress that those in power have made over the years.

The push and pull between assimilation and exoticization figures heavily across the drawings. In Monopoly of Patriotism (2019), a piano lies prone in a grassy plain—a fresh kill pierced by scores of arrows. It is a complicated mise-en-scène, unique in that European culture, symbolized by the highbrow musical instrument, here becomes the hunted. Fuenmayor notes that this drawing was partly made in reaction to Werner Herzog’s 1982 film Fitzcarraldo, about a white Irish protagonist who dreams of bringing opera to the indigenous people of the Amazon. It is a story with an unsettling colonialist subtext, which Fuenmayor flips on its head as part of his larger project of inversion. Monopoly of Patriotism also references the work of the Cuban collective Los Carpinteros, who play with systems of visual syntax to stage contradictions, and the contemporary Chinese artist Cai Guo-Qiang, known for his hanging installation of tigers and traditional fishing boats, among other objects, impaled by arrows.

Fuenmayor’s drawings are never about just one thing. Even a subject that has become such an iconic image within his practice—the banana chandelier—is constantly evolving. In the aforementioned Moral Darkness, for example, light and dark are reversed, while in Pantomime (2018), the chandelier has crashed to the floor, limp and broken and yet defiantly still lit. Fuenmayor explains that Empire offers “different ways of exploring hybridity, opulence, and decadence by opening up ecosystems of possibilities.” Because the works pull in different directions, viewers can understand them as they wish. At their core, however, they are a collective “attempt to make something out of the ruins of past empires—empires that we’ve been negotiating throughout our entire lives.”

Gonzalo Fuenmayor was born in 1977 in Barranquilla, Colombia, and lives and works in Miami, Florida. He earned his BFA from the School of Visual Arts, New York, in 2000 and his MFA from the School of the Museum of Fine Arts, Boston, in 2004. Fuenmayor has exhibited extensively across the United States, Latin America, and Europe, including in the Florida Prize 2018 at the Orlando Museum of Art; in a 2015 solo exhibition at the Museum of Fine Arts, Boston; and as part of Caribbean Crossroads at the Queens Museum, New York, in 2012. In 2019 he will be resident at the South Florida Art Center. This is his third solo exhibition at the Dolby Chadwick Gallery.